The following describes the Application Programming Interface (API) of the Safety Pool™ Scenario Database (SPSD), which can be used by authorised systems to access the data within the database that has been made available to access.

How to use the API

The API is a Restful API that has been implemented using the standard HTTP protocols which means that it is easily accessible using a variety of tools and programming languages; tools such as Postman can be used to test communicating with the API.

The root location of the API is at: https://live.safetypooldb.ai/api. The API is only accessible via HTTPS and requires TLS v1.2 or higher. Currently, the API only allows read-access to the database.

Before the API can be used, the System Administrator for the organisation to be accessed has to enable API access by logging into the SPSD, and then going into Settings and clicking ‘Enable Access’.

This will then generate a unique API Key which will need to be passed to the API in order to use it. The API Key is unique to the organisation for which it has been created and should be stored in a secure way to prevent unauthorised access to the database. Note that the API Key cannot be used to log into the SPSD via the User Interface.

If API access is no longer required then it is recommended to disable API access by going into Settings and clicking ‘Disable Access’. Note that if API access is re-enabled then a new API key will be generated, and so any existing systems which have API access will need updating with the new key.

In order to use the API to access data, an API Key must have been obtained first. The API Key is used to authenticate callers to the API.

The API methods which access data are secured and require a JWT Bearer token to be passed with each request.

To start a session, the createtoken2 method must be called with a valid API Key passed in the request body. 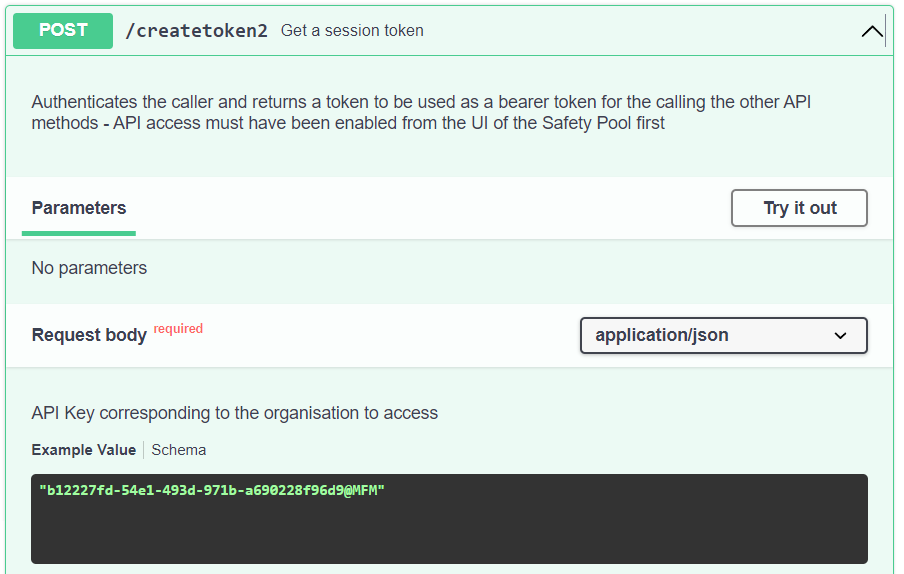 This will return a JSON object which contains a token which must then be passed as a bearer token on subsequent calls to secured API methods. The token will expire after a set period time which can be found in the JSON object returned by the createtoken2 method.

There are two types of data which can be accessed via the API: Scenarios and Test Suites.

Note: care should be taken when accessing data that requests are only made for data to which the organisation is allowed to access, otherwise this might be detected as an attempt to gain unauthorised access to data and API access will temporarily be disabled for a few minutes.

To retrieve a scenario from the database, the following method should be called:

The method requires that the scenarioId of the scenario is passed to it. The scenarioId is the unique identifier of the scenario which is a Universally Unique ID (UUID), and corresponds with the URN field visible in the Scenario View in the UI. Other API methods also return ScenarioId’s which can be used as input to this method.

The method returns a JSON object that conforms to the ASAM OpenLABEL standard.

It contains the scenario definition and tags describing the scenario. Click here for a full details on the data returned.

Within the SPSD, it is possible to upload files and associate them with scenarios, for example, OpenScenario and OpenDrive files can be uploaded to provide an alternative definition of a scenario which can be useful in a situation where a testing toolchain does not support WMG SDL.

To obtain a list of files which are associated with a scenario, the following method should be called:

The method will return a list of file references which can be used to retrieve files using the following method:

The test suite data returned will include a unique identifier for each test suite that can be used in other API methods to retrieve further data related to the test suite.

To retrieve a Test Suite from the database, the following method should be called. The testsuiteId parameter can be obtained from having previously retrieved the list of all test suites, or can be found in the SPSD UI by viewing a Test Suite and making a note of the Test Suite ‘External Ref’ field.

The method returns a JSON object which contains details about the Test Suite and includes a references to the scenarios associated with the TestSuite. The scenario definitions can be retrieved by calling the scenario get method.

The following method will return the Safety Pool tagging ontology in Turtle format. The ontology is useful when processing scenario tags contained in OpenLabel files downloaded from the database.

Was this article helpful?
Thank you for your feedback! Our team will get back to you
How can we improve this article?
Your feedback
Comment
Comment (Optional)
Character limit : 500
Please enter your comment
Email (Optional)
Email