You can create new scenarios in the database, either for exclusive use by your organisation, or for wider publication and use by the Safety Pool community.

To create a new scenario, start off by going into the library in which you want the scenario to be kept, and then click the 'New Scenario' button. If the button is not present, it could mean that you do not have permission to create new scenarios, in which case contact the system administrator for your organisation, or that the library is not one in which you are allowed to add scenarios.

You will then see the new scenario template dialog from which you can choose a template to base your scenario on. 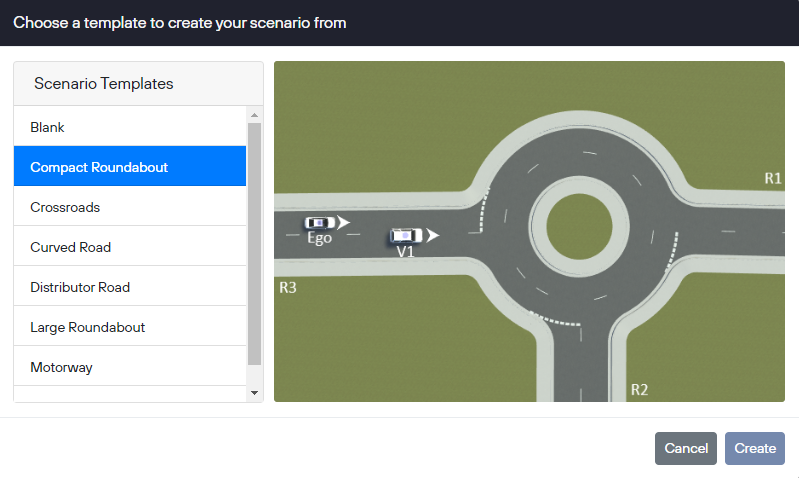 To create a scenario entirely from scratch, select the 'Blank' template.

Creating a scenario from a pre-built template

A quicker option is to create a scenario from one of the pre-built templates. The templates include an SDL definition of the scenario which can be edited and the corresponding set of ODD tags.

Creating a scenario from an existing one

Note that you can create copies of scenarios in public libraries but the copies will be made in one of your own private libraries.

Tip
If you want to update a scenario which is active, then use Revise scenario to create a new version.

The tags that you add to a scenario are very important as they are the means by which scenarios are searched for, so the effectiveness of searching depends on the quality of your tagging.

To add tags to a scenario, expand the Tags tree and click on the tags that you want to add - they will then appear in the Selected Tags section.

When creating a blank scenario, there maybe some tags already in the Selected Tags section - these will be mandatory tags which must be present on scenarios and cannot be removed.

Tags which can have a value specified will have a default value set - to change the value simply click on it and an editor will appear which will let you enter a new value. The default comparison operator is '=' and can be changed by clicking on it and selecting a different one from the list.

The definition is where the SDL for the scenario is entered and must correspond with the definition language selected.

Whilst you are in the process of creating a scenario, the status of the scenario is at 'Draft' which indicates to other users that the scenario is still being worked on and is not ready to be used yet.

When you are ready for the scenario to be used, it needs to be activated - click here for instructions on how to do this.

Was this article helpful?
Thank you for your feedback! Our team will get back to you
How can we improve this article?
Your feedback
Comment
Comment (Optional)
Character limit : 500
Please enter your comment
Email (Optional)
Email